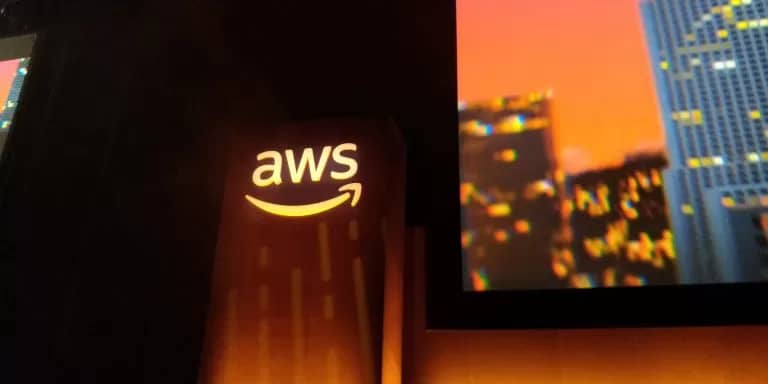 This is AWS, with it’s a huge crowd of 12,000 attendees, amazing speakers,  multitude of partners and mind-blowing technical sessions.

Just the check-in and badges alone, seemed like a big challenge. However, it went pretty smoothly and we were in, in a matter of minutes. Really impressed with the venue organisation.

Keynote started with the usual stats breakdown confirming the number of attendees, with an additional 7000 people streaming in to see the keynote live. In addition the conference was offering another 65 technical sessions to attend.

Amazon has been showing an amazing growth since 2014 almost doubling in size every year with last year’s year-on-year abroad comparison of 49%, exponential growth in active customers and total revenue rate of 22 billion dollars.

Among many others, we’ve seen Peter Vrik, Director of Connected Car and Future Technology, Jaguar Land Rover, presenting great progress around the in-can voice technology . A big announcement was the enterprise contracts for AWS marketplace comma easing some of the contractual obligations on both sides into a few easy clicks. We’ve also seen how separate Amazon web services were used to build a whole infrastructure for smart devices such as iRobot vacuum cleaners.

AWS services matrix has grown quite a bit, but this year’s presentation was especially interesting since a lot of these services now don’t fit on a huge screen that they were being presented from. Amazon could only show the core offering, confirming how vast and diverse their efforts to bring in various functionality to AWS users is. We’ve also seen great investments on machine learning front . This was always deeply integrated into the long-standing Amazon heritage. With services like personalised recommendations present on the site for a very very long time. As well as fulfilment automation and the recent attempts at delivery drones, Alexa and Amazon Go shops. With ML being such a resource heavy process, Amazon leads by introducing a much-required new stack. They went into much detail in terms of how businesses can build their own machine learning frameworks and procedures. Utilising many of the new developments of the Amazon cloud product.

Another big push from Amazon was around security. Stating that “Security is everyone’s job”, they presented AWS tool set that makes various services, secure and compliant with many of the current standards. As well as many other initiatives that aid administrators and staff in up keeping the security to the highest level.

Continuing from last year, the service infrastructure was mentioned a few times and Amazon presented an impressive array of customers currently using Serverless. Organizations like the Guardian, Autodesk, Thomson Reuters, Met Office and Vogue to name a few.

We were also quite impressed with the number of partners and the ecosystem Amazon built around AWS. With more than 94 partners present in the main exhibition area, we met with quite a few during the breaks. Unsurprisingly there are plenty of businesses that thrive off the back of Amazon web services backbone.

There also was this big Alexa booth, which was very cool.

In conclusion, with Amazon being the undisputed cloud leader and the interest we’ve seen this year as well as in many previous years, plus the annual growth figures, it’s hard to imagine AWS going away anytime soon.

We use cookies to analyse and improve our service and personalise content, advertising, and your digital experience. Find out more about which cookies we are using or switch them off in settings.

This website uses cookies so that we can provide you with the best user experience possible. Cookie information is stored in your browser and performs functions such as recognising you when you return to our website and helping our team to understand which sections of the website you find most interesting and useful.

Strictly Necessary Cookie should be enabled at all times so that we can save your preferences for cookie settings.

If you disable this cookie, we will not be able to save your preferences. This means that every time you visit this website you will need to enable or disable cookies again.